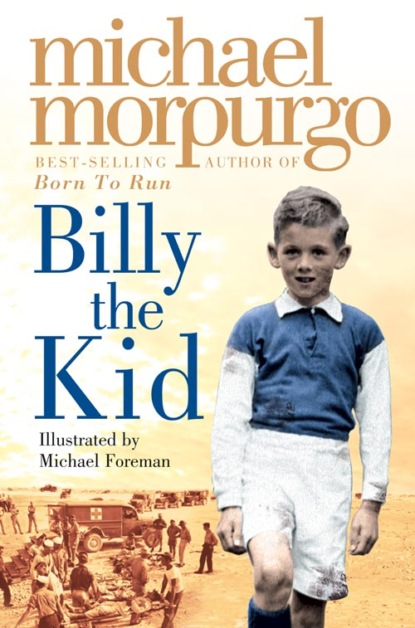 Discover the beautiful stories Michael Morpurgo, author of Warhorse and the nation’s favourite storyteller.Billy was a champion soccer star, playing for Chelsea in the 1930s. But that was before war broke out…Billy the Kid is told through the voice of an 80 year old man, who looks back on his life as Chelsea’s champion striker until the outbreak of war in 1939 and on through his subsequent life. Billy joins Chelsea as a football apprentice, rises through the reserves to become a real champion. His passion for football sees him through the war years – even as a prisoner of war he organises a friendly against the Italians – but, having been injured by a mine he cannot play for Chelsea on his return to England. Billy turns to vagrancy and alcohol and for years he wanders up and down the country. He re-settles in London in a derelict house and is befriended by a family who move him to a shed in their garden. He, in turn, helps their son with his football who in his turn becomes a Chelsea player. Billy becomes a Chelsea Pensioner and his 80th birthday is celebrated when Chelsea play at home. A novel for both children and adults which deals with some difficult issues. Michael Morpurgo’s storytelling is superb and this will be a welcome follow up to the previous Morpurgo/Foreman collaboration – Farm Boy.

For Francis and Nan.

For my sons Jack, Ben and Mark

and all fans of the great game.

And for Gianfranco Zola.

Thanks for the memories.


I shouldn’t be here really, not by rights. I should’ve been pushing up the daisies a long time ago. But I’m not. I’m here, and I’m eighty years old, eighty years old today. One way or another I’ve been a lucky old beggar. I’ve got my eyes, my ears – all right, they may be a bit on the fuzzy side, but they work – and I think straight, most of the time. Of course, the old knee gives me a lot of grief, but it always has done, ever since the war anyway… I’m used to it. Can’t complain, not on a lovely day like this.

Tenth of April and I’m sitting on my favourite park bench under my favourite tree, a great spreading chestnut tree. And the bees are out. Lovely. I’ve got my picnic on my lap, and there’s a bunch of kids playing football. What more could I want? One of them’s good too, skinny like I was, a bit scrawny, little bandy legs, but he leaves them all standing. Like I did, once.

I think the boys are going to put on a bit of a birthday party for me tonight. I’ve got to be back by six at the latest – that’s what they said. I’ll do my best, but it’s Chelsea against Liverpool, and I’m not missing a single minute of it, party or no flipping party. I couldn’t sleep last night, I never can before match days. Too wound up. I’ve always been like it. “It’s only a game of football, Billy,” – that’s what the boys keep telling me. But it’s more than that. A lot more. I know I should’ve given up by now, but I haven’t. When it comes to football I’m like a little kid, like those kids over there in the park, the same park I scored my very first goal – that’d be well over seventy years ago now.

Dad sometimes got tired in the afternoons, and had to go and lie down, then I’d practise by myself up against the brick wall – with both feet. Dad always made me do it with both feet. He told me two things I’ve never forgotten: that if I wanted it badly enough I could be the best footballer in the land, and that I must never go fighting in a war, any war. I tried to do what he’d told me, but things didn’t quite work out the way he’d have wanted. The sun was shining that day too, but it was cold, and Battersea power station was belching smoke out of its chimneys. My dad was standing there watching me score my very first goal. We went off to the Chelsea match afterwards – against Preston North End – and Chelsea lost, but that day I didn’t mind, neither of us did. Happy as a lark I was, and so was my dad. He carried me all the way home on his shoulders. He never said much, he never did, but he was proud of me that day, I know he was. “One day,” he said, “One day Billy, you could play for Chelsea. All you’ve got to do is work at it.” And I believed him.

That’s what my dad did for me, and then later on Ossie – Mr Osborne from school. They gave me self-belief, and that counts for just about everything in this life. If you haven’t got that, you haven’t got anything, and I should know. Like that scrawny kid out there I was a natural. I had a lucky gift. For a start I was nippy. I was best out on the wing, the right wing. No one could catch me out there. I was faster than all the kids twice my age. And somehow I could always make a football do whatever I wanted it to. It just came easy to me, I don’t know why, but it did.

We always kept the special football on the shelf in the kitchen greased up so it wouldn’t crack. Dad had brought it back from France when he came home from the First World War. He’d found it in the mud on the Somme – the only good thing he ever brought back from that war, that’s what he told me. The trouble was that he’d brought something else home as well – gas in his lungs. I can remember his cough better than I remember his voice. Sometimes he’d be coughing his heart out all night long, and I’d lie there listening in the dark and crying because I could hear how it was hurting him.

I grew up knowing him a lot better than I knew my mother. He couldn’t go out to work on account of his lungs, so we were together a lot. Mum would take in washing and be working all day every day, to keep the wolf from the door; and then she had my little brother Joe to look after as well. Dad and me played football for hours on end – in the street, in the park, in the back garden, anywhere. I was only allowed the special football at weekends and even then only when it was dry. He didn’t want it getting wet. We played with a tennis ball. Dad said if I could do it with a tennis ball, then a real football would be “easy-peasy”.

Only a few days after I scored that first goal out there in the park, my dad died. Suddenly there was no more coughing in the house. Mum let me carry his football to his funeral. I held her hand all the way through. For the first time it was me holding her hand, not the other way round. We buried him in Putney churchyard, down by the river. It was a grey day. He always loved the river. We’d often go feeding the ducks down there, then we’d sit and watch the boats go chugging by. So it was just the right place for him. You’ve got to be in the right place when you’re dead, that’s what I think. I mean, after all, you’re dead for a long time, aren’t you? I greased the football up when I got back home and put it back up on the shelf in the kitchen, and that’s where it stayed. I never kicked it again after that.

I grew up quick after Dad died. We missed him, of course we did; but there wasn’t time to go all tragic about it. For a start, Mum had another baby on the way. There was little Joe to look after and school to go to, and the washing to fetch and carry for Mum. But every spare five minutes I’d be out the back with my tennis ball, shooting or heading or trapping or dribbling. And I never missed a match day at Chelsea, not if I could help it. That was why I turned professional, sort of, at the age of eight – to pay for my ticket. But then I got caught. And that was how Ossie came to be my coach – in a roundabout sort of a way.

Emmy was just born. Mum needed every penny she could earn from taking in washing to keep us all fed and clothed, so I knew I couldn’t ask her for money. If I wanted to go to the match, then I had to earn it somehow, or steal it. Ossie said it was stealing, but it wasn’t, not really. It was just a bet – a bet I knew I’d win, but a bet just the same. In break-times I’d dribble a tennis ball from one end of the school playground to the other, and there was a farthing in it for anyone who could take the ball off me – one at a time and no fouling – and a farthing to me if they couldn’t. They all knew I was good, but they all fancied their chances. Nine times out of ten I’d manage it. I’d send them one way and go another, or push it through their legs, or just dribble round the outside of them. It was easy pickings, and I always had enough for a ticket at the Shed End on Saturdays – I’d always gone in the Shed End with Dad, right behind the goal. My favourite spot in the whole world – still is.