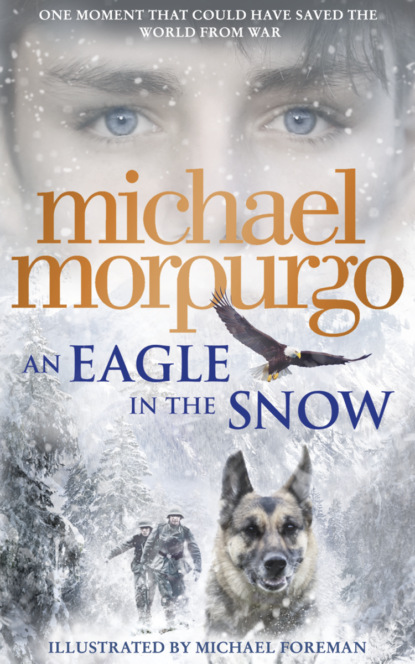 An Eagle in the Snow

The powerful new novel from the master storyteller – inspired by the true story of one man who might have stopped World War II.1940. The train is under attacks from German fighters. In the darkness, sheltering in a railway tunnel, the stranger in the carriage with Barney and his mother tells them a story to pass the time.And what a story. The story of a young man, a young soldier in the trenches of World War I who, on the spur of the moment, had done what he thought was the right thing.It turned out to have been the worst mistake he ever could have made – a mistake he must put right before it is too late…

An Eagle in the Snow

Michael Morpurgo and Michael Foreman assert the moral right to be identified as the author and illustrator of the work.

A catalogue record for this book is available from the British Library.

All rights reserved under International and Pan-American Copyright Conventions. By payment of the required fees, you have been granted the non-exclusive, non-transferable right to access and read the text of this e-book on-screen. No part of this text may be reproduced, transmitted, down-loaded, decompiled, reverse engineered, or stored in or introduced into any information storage and retrieval system, in any form or by any means, whether electronic or mechanical, now known or hereinafter invented, without the express written permission of HarperCollins.

This book is dedicated to Private Henry Tandey VC.

And this is why. Many of my stories have come from the lives of others, from truths, written or remembered, this one perhaps more than any other. Certainly had I not discovered, through Michael Foreman, the extraordinary story of the life and death of Walter Tull, the first black officer to serve in the British Army, I should never have written A Medal for Leroy. Had I not met an old soldier from the First World War who had been to that war with horses, in the cavalry, I should not have written War Horse. Had I not come across, in a museum in Ypres, an official letter from the army to the mother of a soldier at the front in that same war, informing her that her son had been shot at dawn for cowardice, I should never have told my story of Private Peaceful. It was a medal commemorating the sinking of the Lusitania by torpedo in 1915 with terrible loss of life, over a thousand souls, that compelled me to think of writing the story of a survivor, which I did in Listen to the Moon.

I write fiction, but fiction with roots in history, in the people who made our history, who fought and often died in our wars. They were real people who lived and had their being in another time, often living and suffering through great and terrible dangers, facing these with unimaginable courage. My challenge as a story maker has been to imagine that courage, to live out in my mind’s eye, so far as I can, how it must have been for them.

So when I was told by Dominic Crossley-Holland, history producer at the BBC, about the extraordinary life and times of Henry Tandey, the most decorated Private soldier of the First World War, I wanted to explore why he did what he did. This I have done, not by writing his biography. That had been done already. Rather I wanted to make his life the basis of a fictional story that takes his story beyond his story, and tries to explore the nature of courage, and the dilemma we might face when we discover that doing the right thing turns out to be the worst thing we have ever done.

Because the life of Henry Tandey is so closely associated with this story, I thought it right to include the history so far as it is known, of his actual life. This you will find in the postscript at the end of the book.


The train was still in the station, and I was wondering if we’d ever get going. I was with my ma. I was tired. My arm was hurting and itching at the same time, inside the plaster. I remember she was already at her knitting, her knitting needles tick-tacking away, automatically, effortlessly. Whenever she sat down, Ma would always be knitting. Socks for Dad, this time.

“This train’s late leaving,” Ma said. “Wonder what’s up? That clock on the platform says it’s well past twelve already. Still, not hardly surprising, I suppose, under the circumstances.” Then she said something that surprised me. “If I drop off to sleep, Barney,” she told me, “just you keep your eye on that suitcase, d’you hear? All we got in this world is up there in that luggage rack, and I don’t want no one pinching it.”

I was just thinking that was quite a strange thing to say, because there was no one else in the carriage except the two of us, when the door opened and a man got in, slamming the door behind him. He never said a word to us, hardly even acknowledged we were there, but took off his hat, put it up on the rack beside our suitcase, and then settled himself into the seat opposite. He looked at his watch and opened up his paper, his face disappearing behind it for a while. He had to put it down to blow his nose, which was when he caught me staring at him, and nodded.

Everything about him was neat, I noticed that at once, from his highly polished shoes, to his trim moustache and his collar and tie. I decided right away that he didn’t look like the sort of man who would pinch Ma’s suitcase. There was also something about him that I thought I recognised; I had the feeling I might have seen him before. Maybe I hadn’t. Maybe it was just because he seemed about the same age as Grandpa, with the same searching look in his eye.

But this stranger was neat, and there was nothing neat about my grandpa. My grandpa was a scarecrow, with his hair always tousled – what there was of it – his hands and face grimy from delivering his coal, and that was after he had washed. This stranger had clean hands, and clean nails too, as well looked after as the rest of him.

“Hope I pass inspection, son,” he said, eyeing me meaningfully.

Ma nudged me, and apologised for my rudeness, before she turned on me. “How many times have I told you not to stare at people, Barney? Say sorry to the gentleman now.”

“Hope so,” said Ma, nudging me again because I was still staring. I couldn’t help myself. The Station Master came past our window then, waving his green flag, blowing his whistle, his cheeks puffed out so that his face looked entirely round, like a pink balloon, I thought. Then we were off, the train chuffing itself, wearily, reluctantly, into slow motion.

He got up, let the window down a couple of notches on the leather strap, and then sat down. He caught my eye again, but this time he smiled at me. So I smiled back.

Ma answered for me. “Ten. He’s a little small for his age. But he’s growing fast now. He should be too. He eats for England. Don’t know where he puts it.”

She was talking about me much as Grandpa might talk about the marrows in his allotment, on and on, but with the same pride and joy, so I didn’t mind too much.

The train was gathering speed now, getting into its stride, sounding happier. Diddle-dee da, diddle-dee da, diddle-dee dee, diddle-dee da. I loved that sound, loved that rhythm. Nothing more was said for some time. The stranger went back to reading his paper, and I looked out of the window at the rows of bombed-out streets we were passing, and I thought of Grandpa’s marrows and his allotment shed, that had been blasted to pieces in the same air raid a couple of nights before. I remembered how he had stood there looking down at the crater where once his vegetables had been growing, all in tidy rows, his cabbages and his leeks and his parsnips. Grandpa’s allotment was the only thing tidy about him. That allotment had been his life.

“I’ll dig it again, Barney,” he’d said, his eyes filling with anger, “you see if I won’t. We’ll have all the carrots and onions and tatties we need. The beggars who done this, I won’t let them win.” He brushed away the tears with the back of his hand, and they were fierce tears. “You know something, Barney,” he went on, “it’s funny: all through the last war, in the trenches, I never hated ’em. They were just Fritzis, fighting like we were. But now it’s different. They done what they done to Coventry, my place, my city, my people. I hate ’em, and for what they done to my allotment I hate ’em too. They got no right.” He took my hand, and held it tight. He’d done that often enough before when I was upset. Now it was him that was upset, and I was squeezing his hand, I was doing the comforting.

But when it came to Big Black Jack, there was no comforting him.

All night during the air raid we’d been down in the shelter in Mulberry Road clutching one another, all of us knowing the next bomb might be the one to get us. You tried not to listen for the next one, but you did. With every bomb that fell you tried to believe it was the last one. But it never was. Grandpa had been the rock Ma and I had clung to, his arms firm and strong around us, holding us tight, and singing his songs, his voice hoarse and loud above all the whimpering and the crying and screaming, and louder still when the bombs were coming closer, when the ground was shaking, when the shelter was full of dust.

When at last the All Clear siren sounded and the terror was over and we came up out of the shelter – how many hours we were down there I do not know – we found the world about us a place of rubble and ruin, hot with fires that were still smouldering everywhere. Mulberry Road, what was left of it, was filled with choking acrid smoke that hung like a fog around us and above us. There was no good air to breathe, no sky to see.

Hoping against hope, we made our way home, to our house at the end of the road. But we had no house. We had no home. And it wasn’t just our place that was gone. The whole street was unrecognisable, simply not there. Only the lamppost was left, the one outside where our house had been, the one that shone into my window at night-times. Friends and neighbours were there, a policeman and an air-raid warden, all clambering over the rubble, scrabbling and searching. Ma said she would stay and see if there was anything that could be recovered. She told Grandpa to take me away. She was upset, crying, and I could tell she didn’t want me with her. But my train set was in there somewhere, under all the ruins, and my red London bus I’d got for Christmas and all the tin soldiers on my shelf, my special cockle-shell too from the beach at Bridlington.

I ran up on to the rubble and started climbing, on my hands and knees.